This spring I saw the WWII Memorial in Washington D.C. for the first time. It was beautiful and moving to say the least. This part of the monument hit me the hardest.

Wall of Stars on the WWII Memorial. So Many Stars.

Freedom Walls hold 4,048 gold stars. Each gold star represents one hundred American service personnel who died or remain missing in the war. The 405,399 American dead or missing from World War II are second only to the loss of more than 620,000 Americans during our Civil War.

My grandpa was a lucky one, who was able to come home after serving in the Pacific in WWII.  So many others had their lives cut short. This is true of any conflict or military operation. It is those whom we remember today on Memorial Day.

Here’s another part of the WWII Memorial on the opposite side of the Freedom Wall of stars.

We visited on a splendid, sunny day during the week. A few more pictures captured the full monument and the Pacific side, including New Guinea and Buna, where my grandpa served in the Army. 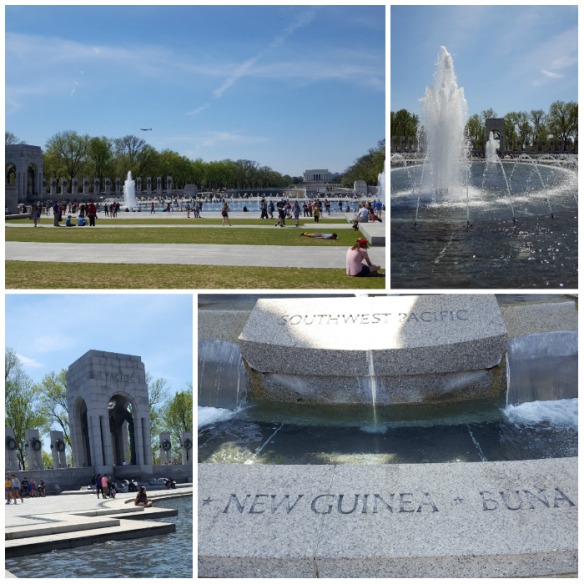 WWII Memorial Monument, you can see the Lincoln Memorial behind it.  Sparkling fountains and gray columns and stone make for a moving and reverent tribute to the fallen.

Blessings to those who made the ultimate sacrifice and to their friends and families. May we all remember and honor them.

6 thoughts on “So Many Stars: The Price of Freedom”