Welcome to a Fly on the Wall group post. Today 9 bloggers are inviting you to catch a

glimpse of what you’d see if you were a fly on the wall in our homes. Come on in and buzz around my house.

I love this challenge so much that I even have my own page for it on my blog HERE.

My 5 and 7 year old kids had some silly thoughts on what to be thankful for on Thanksgiving. Here’s what they shared as we were driving to Grandma and Grandpa’s house:

Big sister: I’m thankful I’m not an ant, so I won’t get squished.

Little brother: I’m thankful I’m not a tree, then I won’t get cut down. (He was thinking of the evergreen trees that we cut down for our Christmas tree)

Many of Little Brother’s religious ed classmates also were thankful for candy, though some did say things like, “family, friends, our house.”

Little brother: Do you know that this stocking is a sock for a giant?

The kids went crazy decorating the tree. They wanted to put ornaments on so quickly. I just listened as I was nearby:

Big sister: Let’s put the cross next to the angel.

Little brother: Yeah, it’s like God is watching over us.

It was too sweet! I guess he is learning something from church / religious ed besides being thankful for God making candy.

It was a frightfully frigid day with a high of five degrees, so I felt motivated (finally) to make something. We had shredded zucchini in the freezer, so I made zucchini bread. When it came time to eat it, I helped myself to the crust and an inside piece. Little Brother said, “No fair! You got two pieces.” I replied, “Yes, the baker gets two!”

We have been coloring and painting (as usual), and I wanted to finally clean up our creations. Little Brother and I decided to hang up some of our favorites in an “art gallery” in our home.  We have two display areas. Here they are: 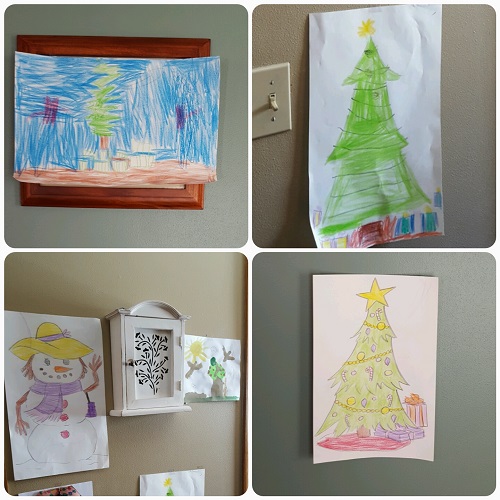 Santa, You are the Best

FINALLY  after five and seven years, respectively, the kids are okay with visiting Santa this year. Here they were with him earlier this month:

Big sister has been consistent in asking Santa and writing about what she wants: “I want a puppy that eats its own poop.”

Bless your heart Santa! This ACTUALLY is a real toy. See Target, FurReal Friends Pax, My Poopin’ Pup.  The food that you can feed it is actually then pooped out, and I believe you then feed the same pellets to the dog. Sigh.

“I see you’d like a special friend for Christmas. Now one thing about a puppy, real, or even pretend, is that flying in my sleigh can be a bit scary for them….. Now you know I will try my best for you, but I will have to check with your family if that’s ok. Will you check too? “

Santa, you are the best!!

I hope Santa is good to you and yours this holiday too! Merry Christmas & Happy New Year!

7 thoughts on “Fly on the Wall – Holiday Sentiments”

Mom, marketing consultant and volunteer who is always on the go.